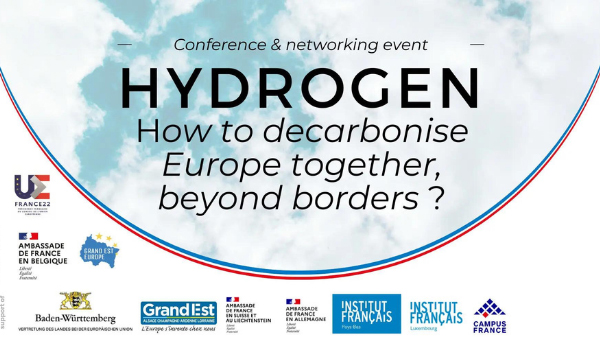 Europe must accelerate the energy transition and the development of hydrogen at all levels – regional, national, and European. Europe must also strengthen cooperation between neighboring territories, all confronted to challenges of production, storage, transportation, and consumption of hydrogen.

Until the end of June 2022, France is holding the Presidency of the Council of the European Union. This strategic time for France is also central for the Grand Est Region, which was granted the French Presidency of the Greater Region, an area of ​​cooperation associating Grand Est to various neighboring territories (Wallonia, Luxembourg, Saarland…).

This event, entitled “Hydrogen: how to decarbonise Europe together, beyond borders?” is hosted by the French Embassy in Belgium and Grand Est-Europe, the Brussels-based representation of 21 public organizations from the Grand Est region (regional and local authorities, universities, consular chambers). This event is the result of a fruitful cooperation with the Irène and Frédéric Joliot-Curie House, the Representation of the State of Baden-Württemberg to the EU and the Region Grand Est, as well as with the French Embassies in Switzerland and Germany, the French Institutes in Luxembourg and in The Netherlands and Campus France.

The event will take place in Brussels during two consecutive days :

The CEO of Hydrogen Europe, Jorgo Chatzimarkakis, will be the moderator of the panel “The Greater Region, a pilot region for hydrogen in Europe?” which will take place on Tuesday 17th May 2022, 14:30-15:45.

The organizer will process your data in compliance with European GDPR. The information you have provided is necessary to organize the event you will be attending, to generate invoices, to confirm your registration by e-mail, to create your badge and to allow you to modify your registration. This data may also be processed by the organizer upon its legitimate interest: to promote its activities by informing you about them, to show you offers from partners and sponsors regarding this event, to obtain analytics about this event, to ensure a satisfactory networking by showing your name and company on the list of attendees. You are entitled to object to these processing operations.

Hydrogen Europe shall only process User’s personal data in the European Union, or in third countries after having secured appropriate guaranties with the subcontractor or recipient. Hydrogen Europe will keep your data after the event until the expiry of the legal retention obligations, in particular fiscal and accounting and until the end of the responsibility.

You can obtain from Hydrogen Europe (data protection officer available at events@hydrogeneurope.eu) the written communication of your data, as well as, where appropriate, portability of the data, rectification, restriction of processing, deletion of data which is inaccurate, incomplete or irrelevant. For further information or to lodge a complaint you may also contact the supervisory authority of the country of your habitual residence.